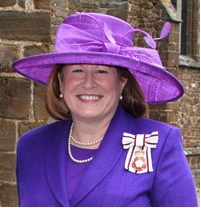 Bosom Pals have the pleasure of introducing Helen Nellis as our most recent Patron.

Helen Nellis was appointed by HM The Queen as the Lord-Lieutenant of Bedfordshire and began her term of office on 22nd February 2012.

Helen’s career has spanned the law, higher education, health and the commercial sector. A qualified Barrister and academic by background, she has worked as a global senior executive search professional and has a consultancy business as an executive coach specialising in the improvement of personal and board- level leadership performance in complex organisations.

She has been Chairman of a number of large organisations including Bedfordshire Health Authority, Luton Health Action Zone and Bedford Hospitals NHS Acute Trust as well as a member of university governing bodies and councils in higher education including Vice-Chairman of the Universities of Luton and Bedfordshire and a Governor at two state sector schools in the County.

Helen is married to Professor Joe Nellis of Cranfield University with three children and enjoys walking, talking, tennis and music. She is attempting to learn golf! Together with her family, she has been involved in supporting development in a village in Ghana for many years. She is a Trustee, President and Patron of a number of charities. 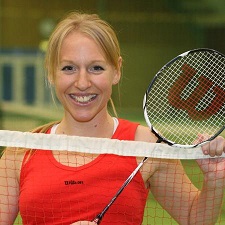 We were delighted when in 2005 Gail Emms MBE, the Bedfordshire Badmington World Champion agreed to be our Patron. Born in Bedford, Gail won a silver medal at the Athens Olympic Games with mixed doubles partner Nathan Robertson. She started playing badminton from the age of 4 and began representing her country in 1995.

Her appearances in both women’s and mixed doubles tournaments has seen her awarded with gold, silver and bronze medals and she consistently achieved results that saw her reach the top of the world rankings. Gail has been 3 times mixed ladies and twice women’s doubles champion. She won a Commonwealth Gold in the Malaysian open in 2002.

Gail has now retired from professional competition, she has turned her attentions to sharing the hugely positive impact that sport can have on life and well-being, working as an ambassador for sport and inspiring young people to be more active.

Donate with Give as You Live